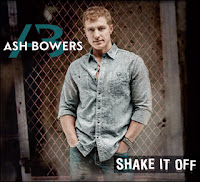 Besides playing bars and honky-tonks all over the U.S., he scored opening slots on two of the biggest new tours in country music: Jason Aldean’s Wide Open Tour and Eric Church’s Young and Wilder Tour. His songwriting also captured the attention of Wide Open Music Group president, Steve Williams, who approached him to record an album for the newly formed Wide Open Records. “Of course I was up for it,” Ash beams. He hit the studio with a vision and the same blue-collar work ethic he had at Tennessee Tractor. In order to maintain his musical integrity, he co-produced the project with Noel Golden and Billy Decker. He also kept writing songs and what he didn’t keep for his own project, was quickly snatched up by artists like Randy Houser, Bucky Covington and score of independent artists who see in Ash what they want for themselves...warm, energetic, catchy tunes that emanate from a hard-working, heartland mindset that reminds you how real life makes real good music. But now it’s his turn to shine. “A good friend once told me, ‘Ash, I’ve been in this town for a long time, but ain’t nobody in the world better at being you than you. So, that’s what you need to do.’ And he’s exactly right.” Listen for Ash to be Featured on A1-Country, Lightning Country Radio starting Sunday.
Posted by A1-Country Radio Network Country Music News at 5:48 PM