OUTSHYNE To Be Feature Artist On A1-Country, Lightning Country Radio 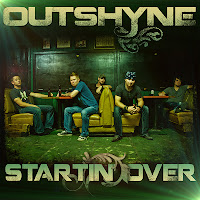 Outshyne is on the move in 2013 and have their sights set on the completion of their
sophomore album produced by Jeffrey Steele & Chip Matthews. With a unique sound thatsets them apart from other artists, this up & coming band is working hard to make a name
for themselves in a highly competitive industry.
Formed in 2007, the group consists of five guys from South Carolina whose deep seeded
southern roots have been the foundation for their edgy, country rock sound.
The band has taken a seemingly successful grassroots approach to growing their brand.
With just shy of 11,000 facebook fans & over 800,000 total
youtube views the band is beginning to make their mark. In 2012, Outshyne played nearly
200 shows, sharing the stage with artists such as Gary Allan, Joe Nichols, Justin Moore,
Tracey Lawrence, Colt Ford, Lee Brice, Eric Church & Trent Tomlinson. While most of
those shows were in the Southeast there are plans to expand in to new regions in 2013.
You can catch the music of Outshyne on A1-Country, Lightning Country Radio starting
Sunday June 23, 2013 thru Saturday June 29, 2013. The groups music will be spotlighted
daily during the feature week. For more details you can visit the Outshyne website.
Posted by A1-Country Radio Network Country Music News at 7:03 PM